AARP in 2019 looks very different from the AARP of even five years ago. It’s a deliberate move that Kamili Wilson, AARP Vice President for Enterprise Initiatives, has been helping to lead in concert with Chief Executive Officer Jo Ann Jenkins’ vision to Disrupt Aging.

These women are demonstrating that when a legacy organization is Mission-Driven, the sky’s the limit — or in AARP’s case, perhaps there are no limits at all.

As with many legacy associations with which we are privileged to consult, AARP is operating in an environment that is shifting rapidly. Changing member needs and expectations are throwing many organizations for a loop as they are challenged to confront fundamental assumptions about who they are. In this case, AARP is facing a cultural shift among Americans of all ages who are challenging conventional stereotypes about aging and retirement. AARP is finding that many Americans, from their 30’s on, are saying, “Retirement? No thanks. I have a lot more I want to do.”

How does an organization fundamentally retool when its programs and structures are less relevant to its members? AARP has intended not only to keep pace and respond to shifting cultural values, but to provide vision for its members and the public as they define their own visions for aging.

This gets us back to Kamili Wilson. She saw an opportunity to reach out to the millions of Americans who could be potential AARP members, if the association spoke to them in a relevant way. Kamili’s strategy was to align AARP’s thought leadership on aging to drive a new paradigm of aging and retirement. She led her team through an innovative approach, leveraging a partnership with Refinery29, a trendsetting global digital media organization with a mission to lead women to “push the status quo, in their lives and in the world.”

As Kamili stated, “We want everyone to fundamentally value aging because we’re all gonna do it. This is in alignment with our CEO’s vision to be deliberate and intentional about fostering intergenerational engagement. Engaging mindsets and ages younger than 50. Among this group, the notion of retirement is foreign to them. AARP wants to change the cultural paradigm on aging in the country.”

She added, “Only 20% of how we age is formed by genetics. 80% is lifestyle. So how can I make different choices that lead to optimal longevity?” AARP has a few suggestions for you. 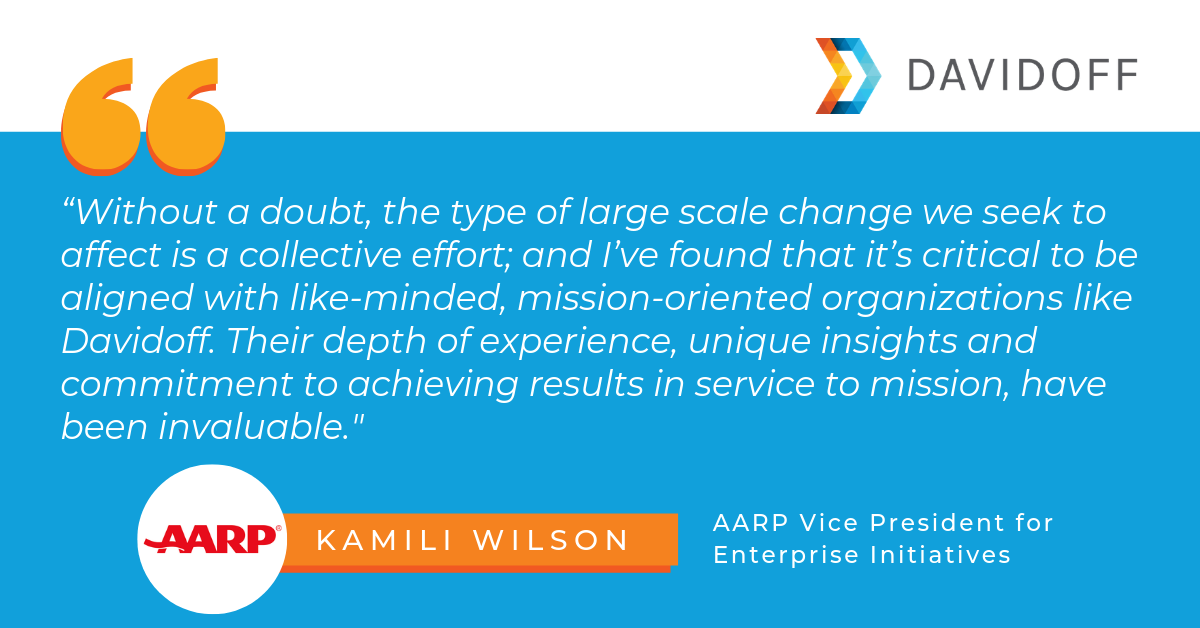 Leadership Development Training: Enhance Your Vision and Understanding of Yourself as a Leader

Leading Through Crisis: A Mission-Driver’s Guide

Responsive Planning: How To Come Out Ahead in a Pandemic